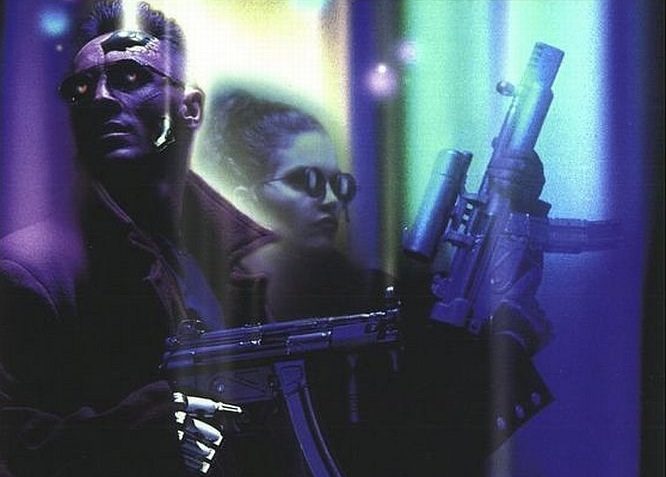 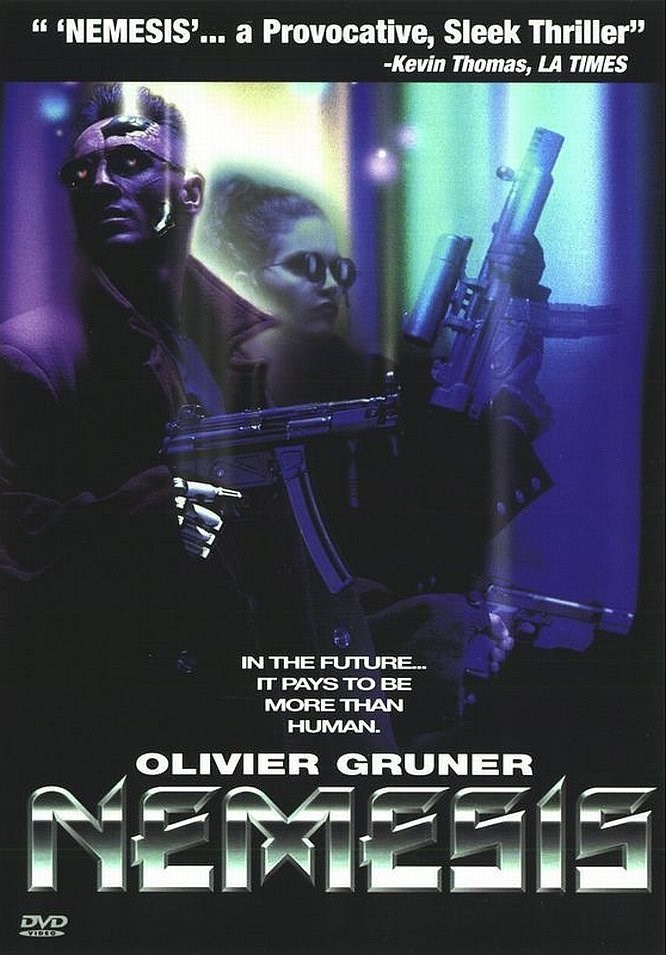 “I love you” said the sexy digital woman on the portable computer.

“Are you crying?” she asks.

We can’t see his eyes because his entire head is wrapped in bandages. He was scalped.  Only his mouth peaks out.

“Get me the hell out of here” the cyborg whispers.

Lost in the rows of the ACTION section at your local video store, I’ve always been baffled that NEMESIS doesn’t get talked about more. I can only assume it’s scattershot tone, cyberpunk inspired narrative, and silly existential musings on the nature of humanity are too much for the casual viewer. Or it may also have something to do with the unfortunate legacy that Albert Pyun’s filmography has garnered in modern day pop culture. Sure, the man has made bad films (a lot actually), but this one of the GREAT ones.

Olivier Grunner (The next Van Damme no one remembers!) stars as Alex Rain, a cyborg hunter who gets blown away in a jaw dropping opening set-piece, and re-built from scratch as more machine than man. Hired by police captain Tim Thomerson (of TRANCERS fame) to take down some terrorists, the film decides to drop any forward drive and instead to turn into a breezy sequences of double crosses and gang meddling in a dusty ghost town that are punctuated by bullet riddled massacres. Eventually our hero ends up in the jungle and back flips off waterfalls while firing a gun. 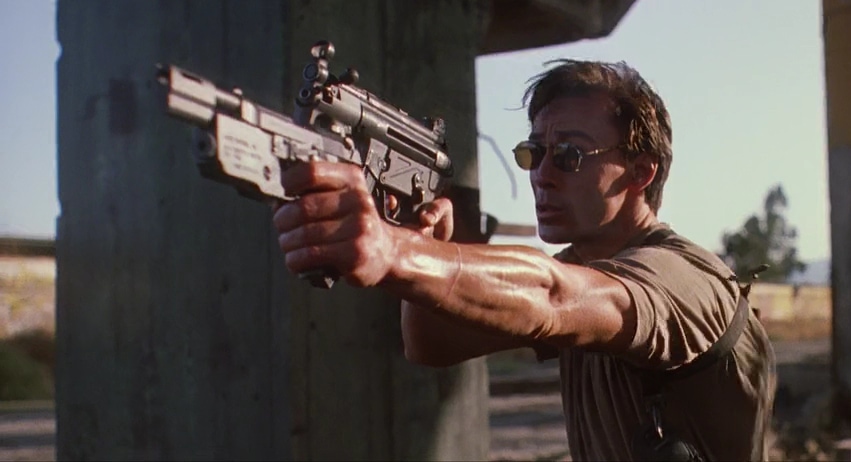 You could say NEMESIS is Blade Runner meshed with a spaghetti western, but that would be discounting Pyun playing completely by his own rules. Just when you think things are going to pick up, they settle down, and when it feels like you’ve gotten used to the quiet tone, a stop motion robot jumps on a plane and starts a fist fight. Cookie cutter NEMESIS is not, and that’s it’s biggest strength and problem. There’s nothing to grasp onto because it’s always spinning in a thousand directions. Pyun has said the producer hated him for spending the first week of filming shooting inserts in a single 4×4 room, because Pyun wanted to build the moments of the film organically around what he could shoot, and the you can feel the push and pull of that technique. Time jumps and plot diversions are the norm, and some threads that you think will last the entire film, get wrapped up in the next scene. Olivier Grunner is not much of an actor, but he has perfect presence for the role, with rippling abs, and soft little french accented voice that sounds hilarious when he goes “Oh shit!” and “Fuck!”. I had the pleasure to see it on the big screen and the sun blasted locales are jaw dropping in their texture. It’s an absolute bummer that modern blockbuster are so sterile these days.

NEMESIS is one part John Woo shoot-em up, one part riff on Dashiel Hammet’s Red Harvest, and one part jungle adventure picture (with vine swinging!) Make it the cult classic it deserves to be.

In my first feature TEDDY BOMB I reference NEMESIS endlessly (including having the DVD cover in a scene), so if you haven’t seen TEDDY yet, pick up the Blu-Ray and bask in my NEMESIS love.

Oliver Grunner’s second best film is the  criminally underrated AUTOMATIC where he plays a robot (there’s a trend here) security guard that has to protect a woman from being murdered in an after hours office building. Die Hard with a Robot has never been done better.