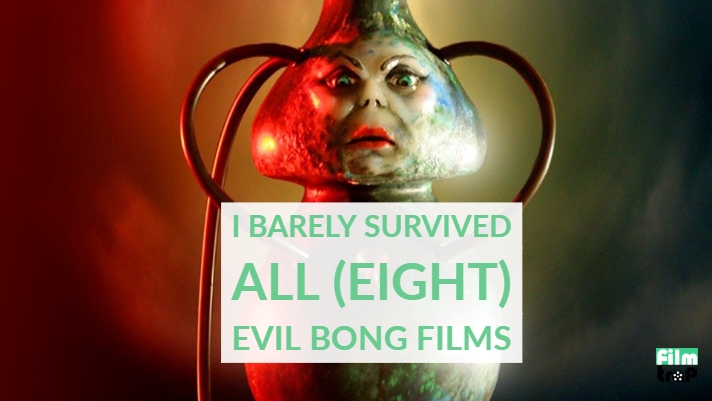 There are eight EVIL BONG movies.

Let that sink in for a moment.

Out there in the world, there was enough interest to generate eight ‘feature length’ motion pictures about a ‘sassy’ talking bong.

To find the answer, I sat down with friend Andrew Barr, of ANDREW BARR ILLUSTRATIONS fame, and we watched all eight EVIL BONG in one day.

The first one (2006) could shakily be called a horror film. It’s got an evil bong that zaps the pot smoking protagonists to BONG WORLD (a grotty looking strip club filled with naked women) where they get to meet famous a handful of Full Moon characters (Jack Death! Yay! Ooga Booga! Boo!) and then get killed by a pair of ‘Monster Breasts’ (Obviously, on sale at FULL MOON DIRECT). The film is glacially paced, with the first murder arriving 50 minutes into the film, and while things are lightened up by the late arrival of Tommy Chong, it ends on a crappy CGI explosion and everyone comes back to life (Uh?). It’s real bad, but it’s about what you would expect from a late period FULL MOON FEATURES production. 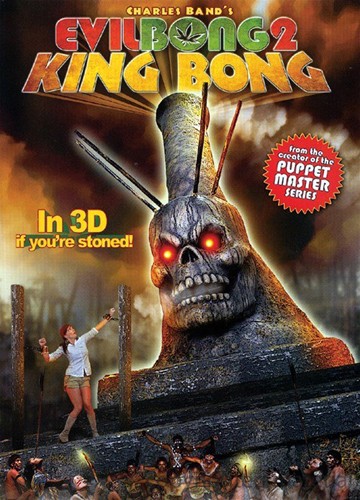 The second outing KING BONG (2009) seemed (at first) to offer a little more. Most of the cast return and this time they’re all suffering from the heightened effects of smoking the Evil Bong: One guy is super horny, another has narcolepsy, and one has a bad case of the munchies – which is visualized on-screen with the most horrifying fat suit in motion picture history. They end up going to the ‘jungle’ to find a cure (Someone’s LA backyard), run into the Poo-tang tribe (Yep. More naked women.) and are taunted by skull shaped KING BONG. Nothing really happens, everyone just sits around talking, and while they do get zapped to BONG WORLD once (A boring jungle set), no one gets killed and the film ends. 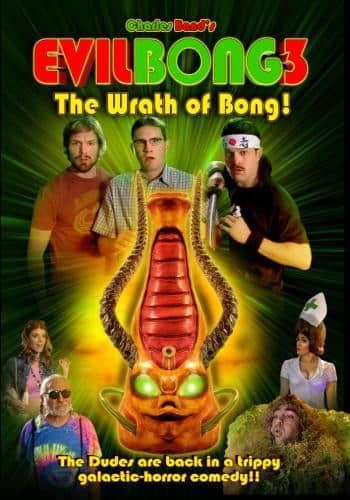 The second film featured the tagline IN 3D IF YOU’RE STONED,  but the third one (2011) was actually shot in the third dimension, even though it takes place principally on a sitcom like-studio set. For the record, we did watch the 3D version, but me and Andrew both took off our glasses halfway through, and the 3D was so minimal we didn’t even even bother switching to the 2D version. This time a character dresses up as a ninja (Cause it’s funny? I guess?), the threat is an Alien Bong that zaps potheads to Bong World to suck out their semen and…turn them into pot…or something. Bong World is a empty black room. It’s just as sad, uneventful, and as creativity free as the last one. I never thought I’d feel nostalgic for the first frigging EVIL BONG film, but here we are. At least that one had some goofy kills.

At this point I was getting desperate, is that all it was going to be? Naked women with gigantic fake breasts, stoners smoking up on-screen, and the titular bong barely making an appearance. For a films series called EVIL BONG, there was very little of its namesake.

GINGERDEAD MAN VS EVIL BONG (2013) raised my hopes a little. It kinda looks like a a film, with shot/reverse shots, a few camera moves, and the Gingerdead Man actually murders two people. Wow! The improved production value seem to be the work of first time series cinematographer Howard Wexler – whose love for colored gels also helped PUPPET MASTER: AXIS TERMINATION. Plus GD VS EB is the first one with a proper FULL MOON crossover: A character from the GINGERDEAD MAN (Robin Sydney) shows up, even though Robin Sydney plays a role in BOTH franchises, so yes, she meets herself at one point playing her EVIL BONG character. I’d almost recommend this film if it wasn’t for the sudden out of nowhere finale that robs the film of any kind of climax. I should know better then to have my hopes up.

Especially when it was all down from there. 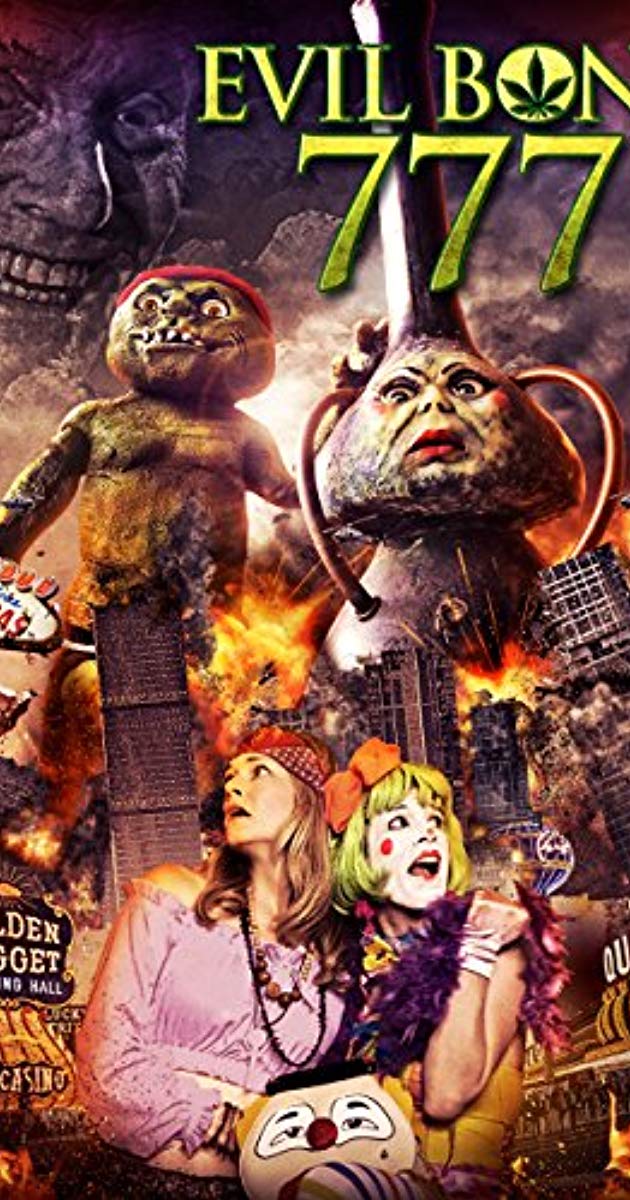 I’m not going to summarize the next four EVIL BONG movies (2015-2018). My sanity couldn’t handle it. They’re all uniformly terrible. None of them are any fun, feature any cool crossovers, or evil killer bongs. The lack of BONGS doing EVIL THINGS is flabbergasting.

The fifth one (confusingly named EVIL BONG 420)  takes place at a bowling alley, the sixth one is an infomercial for Full Moon’s racist BAD ASS DOLLS toy line, and the seventh one takes place in ‘sexy hell’ so everyone can stand in front of a green screen for most of its paltry 65 minute running time.

The Seventh EVIL BONG film is compromised of the cast going on a Vegas vacation. They watch a hardcore puppet show, they visit a haunted hotel, and go to a monster museum.

There’s no suspense. No goofy gore. No laughs. The Gingerdead Man shows up in all of them and all he does is fuck women.

You read that right.

I hate these films so much

I get that they were shot in two to three days, I understand that the concept is dumb,and I even understand that Band wants to use them mostly as infomercials to sell his wares. I’ll even give a pass to the continuity that forces me to follow that a character from the KILLJOY franchise shows up, played by Robin Sydney again, who is a copycat of another KILLJOY character. For some reason.

What I don’t get is why they don’t give the BARE ESSENTIALS OF WHAT WE CAME FOR. I want the Evil Bong killing people, the Gingerdead Man killing people, and characters doing ANYTHING but sitting around and smoking weed. I’M ALREADY SMOKING WEED! I DON’T NEED TO WATCH SOMEONE DO IT!

Don’t watch them. Please. Just don’t. It’s not worth it even worth it as a curiosity.

I can’t imagine these films have any fans. Not even the highest of high person would enjoy something EVIL BONG 5. The only reason I can fathom they exist is because Charlie Band thinks the idea is funny. There’s no other reason for any of these abominations to exist.

After it all ended, Andrew Barr said “This was the worst marathon I’ve ever had.”

He was not wrong.

If there’s an eighth EVIL BONG film I will not watch it.

And that’s the most damning statement I could possibly make.